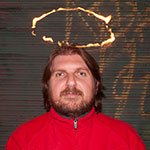 Andreas Katsakos was born in Larissa, Greece, in 1973.
He studied Photography at the E.S.P VET.

He currently works at the General Hospital of Larissa.
He has been practicing the art of photography as an amateur since 1996.
He has been an active member of the Larissa Photography Club (1997 - 2012) and the “Fotoporoi” group - founded by the Municipality of Eleftherio Kordelio Cultural organization - (2006 - 2008).

He has presented his photography work in many group and solo exhibitions in Greece and in various albums published by the LPC and the “Fotoporoi” photo group. His work has been published in photography magazines as the “Photo book”, “Antilipseis”, “Fotografos” and others.

He has curated and organized many photography shows and events in the last years.